Recently, I rewatched the film The House of the Spirits (1993, d.: Bille August), not all the way through, but long enough to spot three types of Othered femininities in it.

Femininity is something that I, women or persons, who identify as women, do every day by embodying the cultural script of gender(ed) expectations and norms; how to look, behave, feel, think, what to expect from a society and what society expects from us. The cultural script of what femininity is, modifies historically (i.e. through time in the society) and biographically (i.e. through time in an individual life), producing an array of femininities, differing themselves on the basis of intersecting gender expression, sexual identity, skin colour, ethnicity, class (social, economic, cultural capital), religious background, age, body ability etc. An individual femininity is therefore a cumulation of different social positions, for example: androgynous, bisexual second generation Asian woman, living in Germany, originating from lower middle class with M.A. degree.

There is one golden standard that all cumulated femininities are subjected to; it is so called ‘good’ femininity. Sociologist Raewyn Connell named it ‘compliant’, scholar Mimi Schippers coined a term ‘hegemonic femininity’ but all in all, it is femininity with many privileges, embodied in whiteness, heterosexuality, middle class, body ability and youth, together with the fulfilment of all woman-constituting roles – a mother, wife, caregiver, housewife.

When not occupying these privileged social locations (e.g. skin colour or class), ill-performing or deliberately rejecting women’s roles (e.g. being a single woman), Othering occurs as a milder or stronger sort of the social repercussion.

First among those femininities is Clara‘s femininity (Meryl Streep). She could be the visual and behavioural prototype of the ‘good’ one – she is a mother and wife, has long, blonde hair, white skin, fragile figure, is dressed in a whitish clothes, she is coming from the upper class, her personality is non-conflicting, peaceful, angelic, almost virginal. But Clara has a flaw.

She is clairvoyant (her name can be interpreted as ‘clear’ or ‘clear-eyed’, unpolluted by material/istic society and unattached to her physical body) and telekinetic (she can potentially rearrange things with her mind). This specific personal trait labels her as a liminal being but her spiritual Otherness is protected by her upper class and skin colour; in a less privileged context, she would be vilified as a mad woman or stigmatised as a person with an (invisible) impairment (‘a freak’).

Her clairvoyance and deliberate muteness can be interpreted as an exaggeration of a gendered expectation for a good woman to be ‘pure’, moral, spiritual and silent. And by this, she has intentionally withdrawn herself from the patriarchal order, a system where women’s visions or voices are anyway dismissed as silly or unnecessary.

Ferula (Glenn Close), Esteban‘s (Jeremy Irons) sister and Clara‘s sister in law, is double Othered femininity – for being unmarried and queer (or latent lesbian). If Clara is depicted as the white angel, then is Ferula a dark antagonist; dressed in almost monastic attire, consisted of black, thick clothes, crucifix, hanging around her neck with mousy coloured hair, firmly styled into a prudish bun. Being socially forced to be unmarried due to her gendered caregiving obligations towards her disabled mother and misogynous brother, her singleness is deepened with her closeted lesbianism.

Ferula personifies the stereotypical cinematic trope of a dangerous lesbian who can lure a straight wife (Clara) into lesbianism and disrupt heterosexual marriage. Her queer affection for Clara stretches from her motherly care to purely lustful tendencies (e.g. she explains while in the confession that she wants to climb into Clara‘s bed and feel her warm skin). It is never directly revealed if those two women have a sexual relationship (they definitely share an emotional one, a quasi-Boston marriage perhaps?), however when Esteban catches them in the same bed (fully clothed though), he decides to send Ferula away. Ferula as a double Othered woman is sentenced to a life of poverty and social isolation which is an expected punishment for a queer singlehood in homophobic cinematic narratives. A lesbian is fruitless for the heteronormative patriarchy.

Pancha Garcia (Sarita Choudhury) is one of Esteban‘s Latina woman workers and multiple Othered on grounds of her skin, nationality, class and gender. The cumulated Othering results in the portrayal of her as a nameless (nobody addresses her by her name) and voiceless (she doesn’t speak, only screams in pain when being assaulted) Othered beauty (i.e. dark-haired, brown-skinned, sensual, young) whose powerlessness toughens Esteban‘s (male) entitlement over her body – he brutally rapes her. Pancha is the tragic reminder of the white male history where women of colour were being animalised, dehumanised and objectified. 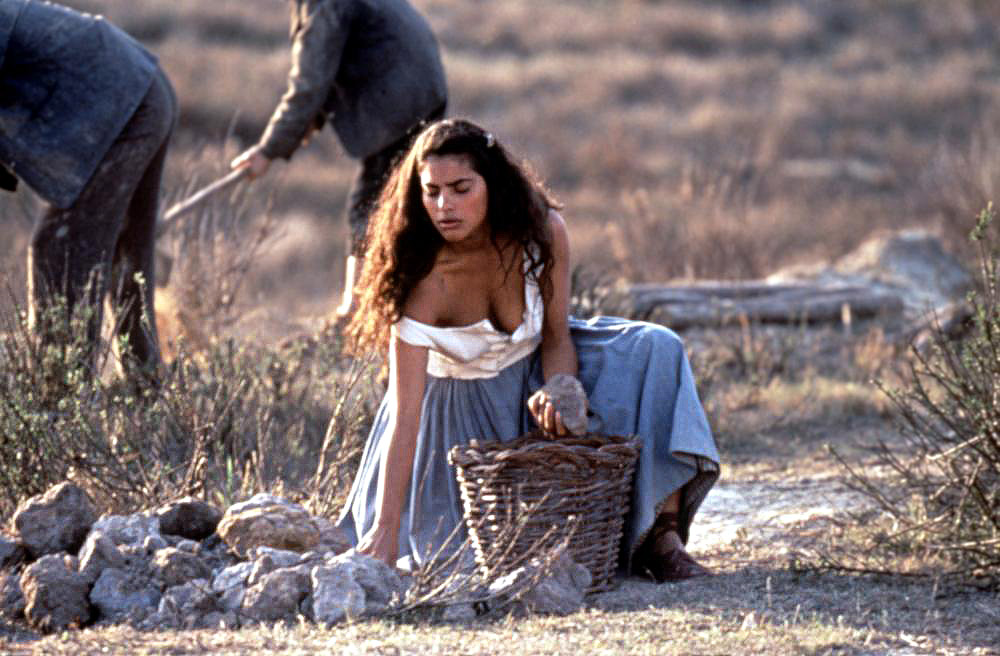 Less obviously deviant and protected by their privileges (or status shield) femininities (e.g. Clara) are also less Othered than those with cumulated disadvantages (e.g. Ferula and Pancha).

But when women distance themselves by choice or social conditions from the standard of good femininity, the annihilation of trespassers is expected. THOTS, based on the novel by Isabel Allende, just continues the literary discourse of magic realism, a genre where gender roles are rarely challenged and by this, any deviation from the norm is met with the social powerlessness (i.e. muteness, social isolation, poverty, sexual assault).

In a masculine world, nothing a woman is or does “wrong”, goes unpunished.