Polyamory as a less conventional social arrangement of intimacy that includes more than two people, consensually involved in a sexual and/or romantic relationship at the same time, is becoming more recognizable and visible even in films. Film is a powerful cultural text and its representations of something less familiar or even Othered can either challenge or reaffirm the traditional conceptions about our social reality; polyamorous relationships can be portrayed within the discourse of acceptability or abnormality (i.e. poly people being punished or relationships being pathologized – ridiculed, diminished, annihilated, trivialised).

In the mainstream cinema industry, polyamory is rarely a central story plot, but when it is employed as an intimate arrangement between characters, it is usually irrelevant to the storyline; in some cases it is glorified as an “unconventional lifestyle”, in some latently disapproved and in some just created without any backstory.

The glorification of polyamory as merely an “artistic whim” occurs in films Henry and June (1990), Head in the Clouds (2004) and Vicky Cristina Barcelona (2008), where polyamory sinks into more important film narratives of human creativity (Henry and June), war (Head in the Clouds) or a woman’s indecisiveness (Vicky Cristina Barcelona – here it is, the bi-stigma of a bisexual’s inherent inability to pick sides). 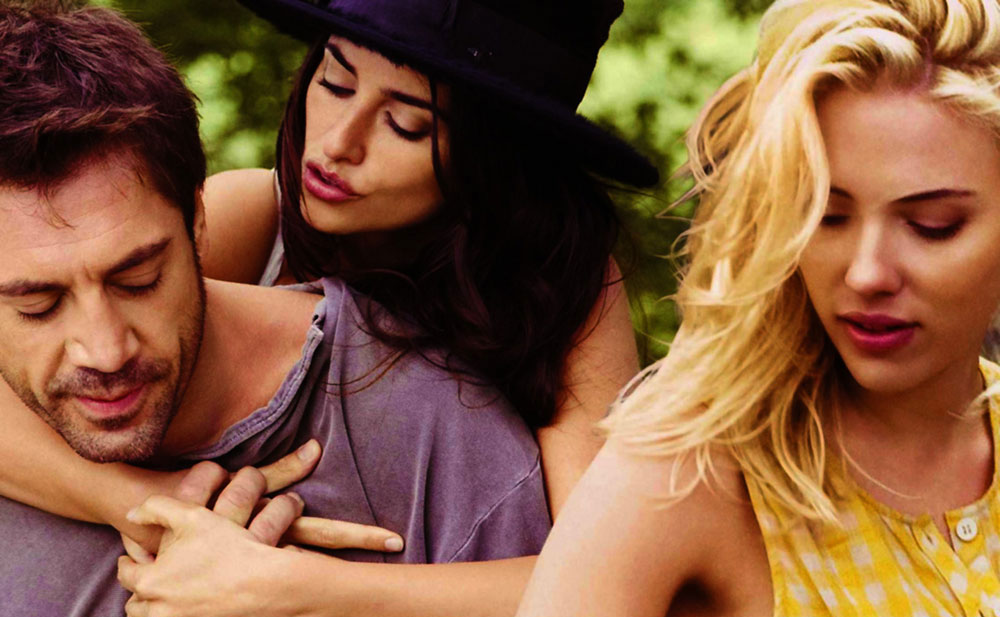 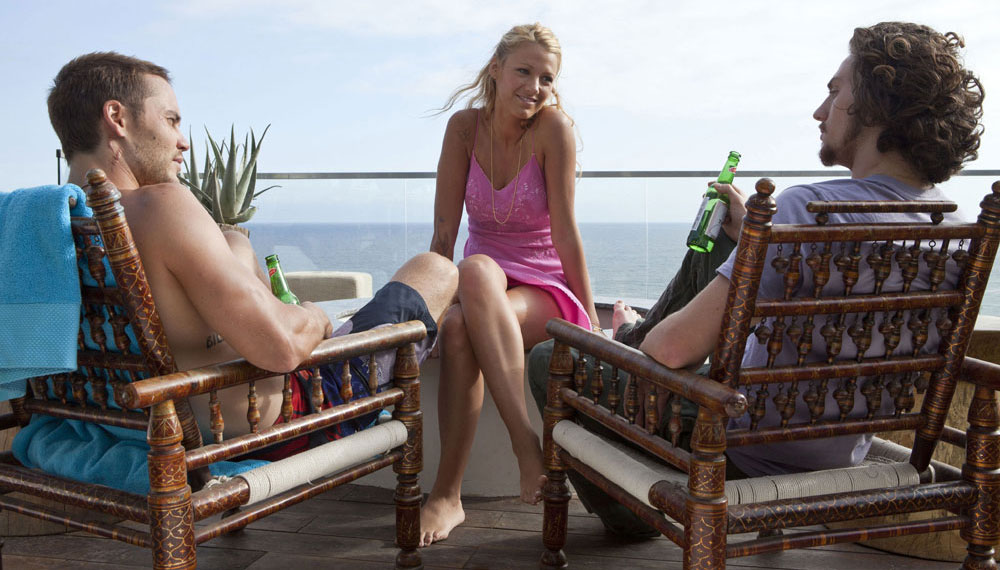 In the monogamous society (and to some extent films do reflect general societal values), poly relationships or characters in films are prone to an inevitable ending or death; relationships dissolve, some characters die. The message is clear: poly relationships are not supposed to exist in our society because of their abjection (polyamory creates displeasure in others, but also stimulates curiosity) and potential disruption of the existing social, sexual, moral and emotional orders.

However, in the German film Three (Drei, 2010), directed by Tom Tykwer, it is quite the opposite; it is the monogamous relationship that is futile and headed for death just to be resurrected as a polyamorous relationship. Three is revolved around a high-profile upper class childfree couple (Hanna and Simon), based in Berlin, who are in their early 40s, when each of them gets sexually and emotionally involved with the same man (Adam), not being aware of each other’s involvements. 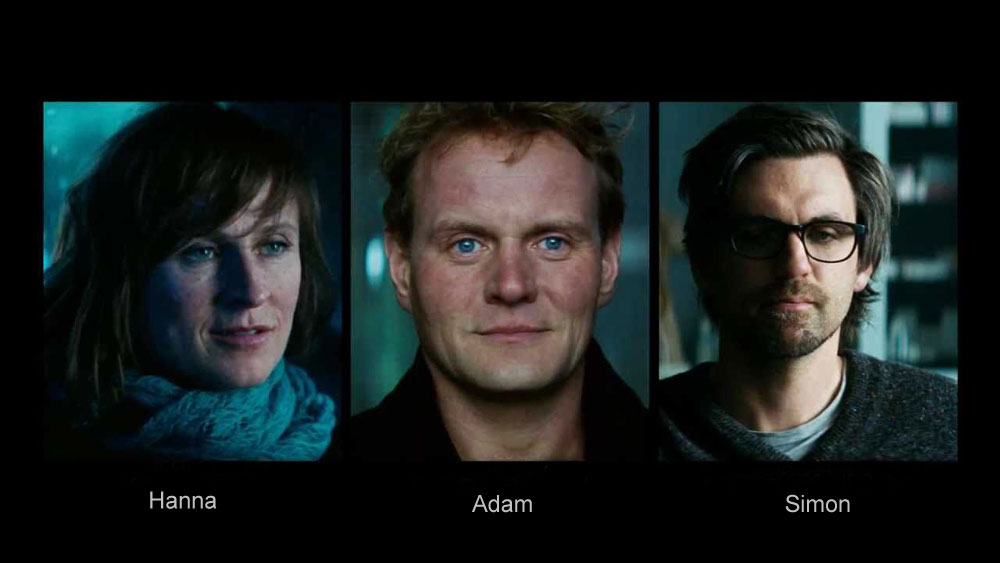 What separates Three from other, aforementioned polyamorous films?

Firstly, it is the transformation of a relationship from dyadic to triadic, a film’s central premise, which happens very organically and poetically. The futility of Hanna and Simon’s monogamous relationship is quickly explained in the first sequence of the film – they are not having sex anymore and quarrel a lot which signals that their relationship of 20 years will either dissolve or mold into something else. If this was a monogamous narrative, they would engage in adultery, an “acceptable” solution that would keep the relationship artificially alive. However, both of them will later engage in “an affair” with Adam, but none of them is being labelled a “cheater” nor is the mood of the film condemning those actions.

In any other film (Unfaithful, for example) the narrative would have been preoccupied with the crucifixion of cheaters and the restoration of monogamy. The semiotics of this film poster maintains the prevalence of monogamy as the only acceptable arrangement of intimacy through carefully positioned symbols. A husband is overlooking the “cheating” situation from above, almost godlike, a lover’s head is cut from this frame – because he is an element that should and will be eliminated, a cheating wife is positioned beneath her husband. The exclusive visibility of hetero monogamous couple is the strategic move that indicates that monogamous marriage will be restored and that the unequal dynamics of a dominant husband and submissive wife will stay intact. 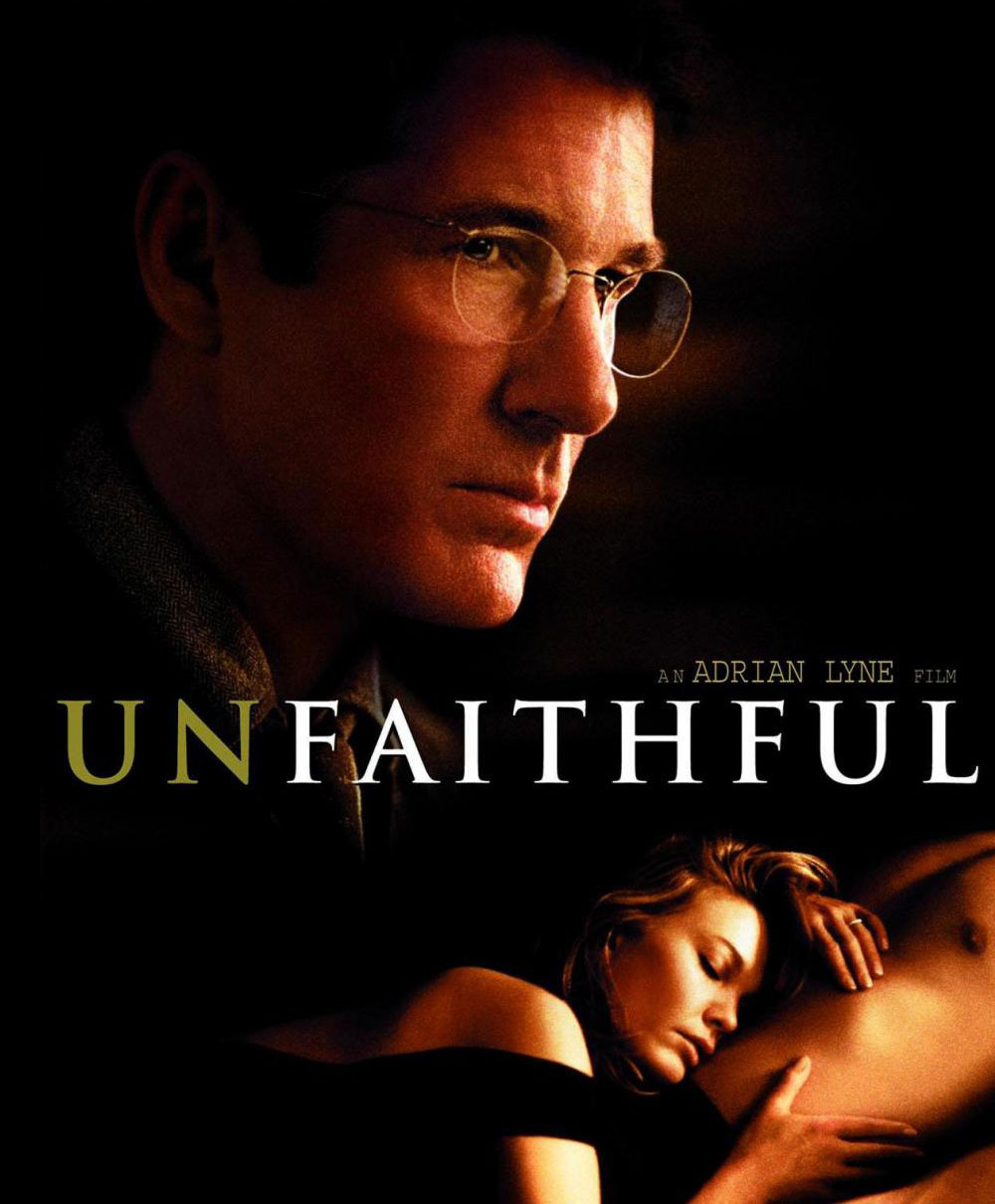 Three also defies the ageist assumption of who can be polyamorous (not only young and beautiful). Simon, Hanna and Adam are not young, they are in their 40s, and they are not too pretty, but still visually relatable. At the beginning of the film, the couple is childfree and at the end, the now poly family is expecting twins. Not only does this encourage the idea of polyamory as a more fertile relationship, it also resists the ageist notion of a woman being pregnant only if she is young/er.

One of the most important aspects in Three is the representation of bisexuality. It is men (Adam and Simon) who are bisexual and not Hanna. There is a lack of positive representations of male bisexuality that can be contributed to the overall cultural bi-invisibility. Adam as a bisexual man, comfortable with his sexuality, is more than just his sexual orientation; he is a human being with several hobbies (e.g. singing in a choir, playing football, being an avid football fan, successful at his profession, practicing karate) and good social skills. It is rare to see a portrayal of a bisexual man so realistic and positive. However, Simon, who was straight so far, must rethink his sexuality but ignorantly falls into a cultural trap of sexual binarism when he wants to redefine himself; after the second sexual encounter with Adam, he explains to Adam that he is not gay. Unfortunately, this bi-erasure is still a common cultural reaction when it comes to non-heterosexualities.

Intimate encounters with Adam leave both of them (Hanna & Simon) pleasantly confused – Hanna’s love for Simon didn’t fade despite her lust for Adam and Simon must also rethink his new sexual identity. Their fulfilled sex lives revitalised their dying monogamous relationship up to the point that they get married. Adam embodies the new relationship energy in now poly relationship.

There are a lot of symbols that indicate or imply the death of monogamous relationship and an ascendance of polyamorous one.

Death is an omnipresent theme in Three and its metaphors are encoded in the death of Simon’s mother (she had pancreatic cancer), Simon’s testicular cancer (he survives) and Hanna’s miscarriages that can be interpreted as futility of the monogamous relationship.

Water as a symbol of rebirth is prevalent in Simon’s redesign of himself; he usually goes for a swim in the public swimming pool which is also the place where he meets Adam. Here, water  has a double meaning for Simon – he is “reborn” as a human being (still amongst the living after his cancer) with the new sexual identity (i.e. bisexual).

There are several implications that 3 is the new form of intimacy; for example, the dance piece at the beginning of the film shows a triad, engaged with each other, “good things come in three”, said Adam when Hanna and he met for the third time and then there is an almost Amelie Poulain sequence that explains the nearly fatalistic importance of the number 3: Simon’s mother had only three months to live, but she died by taking 39 sleeping pills on September 3rd at 3:09, Simon’s sister moved to Stuttgart in 1993 and was aged 39, came to see dying mother by train at 9:30 at moonlight tariff 39 euros …

Eventually, they do find out that they are in a triadic relationship with each other (Hanna + Simon, Simon + Adam and Hanna + Adam) and after the first shock and breaking up, they get back together, forming a poly relationship. The last scene shows their potential not just for a polyamorous relationship, but also for a poly family.

On the other hand, Three also has its weaknesses. Protagonists are quite privileged, they are white (despite the fact that the film was shot in multi-ethnic Berlin, there are no other ethnicities present but Caucasian or white), highly educated and well off (Simon is into building arts, Adam and Hanna are both Ph.D.’s.), all of them are cisgender, able-bodied and able-minded.

Three may not be a perfect film, but it manages to be a trailblazer for a more realistic and mature approach on how to represent poly relationships and families in the mainstream cinema.