Let’s take a look at this group photo from Pensioners’ Association from Maribor. There are 41 people in it, 35 women and only 5 of them are having grey hair. 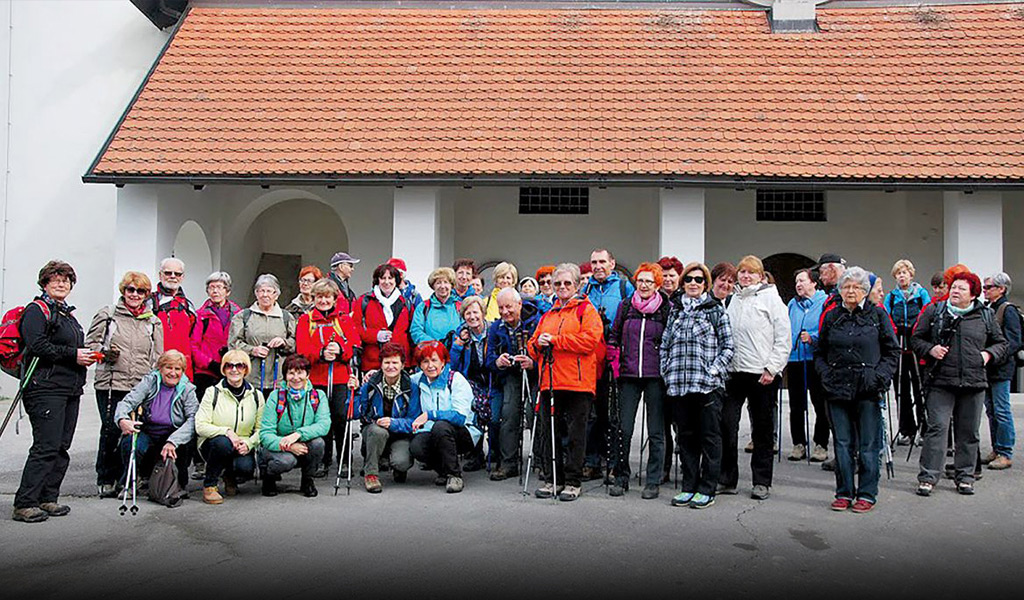 Hiding grey hair by colouring or dyeing them is part of a beauty work for women or work of femininity that is work women do on their appearance, manner and personal identity to maintain femininity – i.e. the ideal of young, white, middle class, able-bodied, cis hetero femininity – throughout their lives. Dyeing hair is part of feminine technologies, associated with women by virtue of their biology (e.g. tampons, birth control, bras, and hair colour) and/or their social role (e.g. kitchen utensils, sewing needles, household cleaning products), alongside with skills, tools and knowledge about those technologies and how to use them that women acquire during their lifespan.

In Western, postmodern societies, where bodies are categorized through “normative or normalizing gaze” (this means measuring, comparing and consequently including/excluding people) this gaze – directed at women’s hair – includes hair standard that doesn’t welcome natural grey hair colour. Being a grey-haired woman translates into being perceived old – hence ugly – and by that, triggering feelings of repulsion or abjection.

Hair carries many culture-specific meanings about a person; their gender, race, ethnicity, social status, sexual orientation, political convictions, occupation, health and age. Grey hair in our consumer culture connotes aging, future body decay (illness, sickness, death), and all these future events evokes fear or phobic-fear (i.e. fear without the known object of fear), avoidance of the subject, aversion, uneasiness, something that is there, but is in the undefined future. Death, as Julia Kristeva has stated, is one of the categories of abjection, together with sexual difference and food loathing. All three of them serve for the preservation of life and constitute the proper social body to conform to the cultural expectations of the physical body. And the cultural expectation for women’s physical bodies is to remove all signs of ageing, including grey hair.

However, having grey hair is a gendered issue – men sport grey hair without being pressured or self-disciplined to hide it by colouring as women do. Women are still regarded as Body, enmeshed in bodily existence in a still current Cartesian body-mind dualism where body – the bearer of flesh, emotionality, sexuality and procreation – connotes life, instability, changeability, disorder, mortality and death. Women’s grey hair are therefore the most visible signifier of aging that causes fear of death or ageism, but according to Iris Marion Young, ageism exhibits border anxiety of the abject – we are confronting our own death and we fear our future selves, only time divides our current selves from our future, older ones. The abject is a border between self and other, and because of its closeness to the subject, cannot be defined as Other or object.

Women’s grey hair has this abject status – they are close to a person’s head, alive at the roots from where they constantly grow, technically dead at the ends and their colour signifies aging. This signifier of an old age can be avoided by colouring them which also serves as a reducer of death anxiety for them and people around them. Grey roots are the border between the artificial colour and grey hair, always threating to outgrow the artificial hair colour. This fear of showing grey roots creates an ongoing anxiety so they must be consciously kept under control.

Dye your hair until you die.

Of course, this association between grey hair and death is socially constructed; originating from the modern conception about death – prior the 19th century, death was common among children and young adults, older folks were rarity and with longer life expectancies, and emerging new discourses – medicine as a main knowledge producer – link between and old age and disease/death was created.

Head, covered with strings of grey hair or grey hair full-on, is subjected to ageist microaggressions or body policing, much of it happening almost mundanely or what Anthony Giddens has described as a practical consciousness: informal (unnoticed, unreflective) speech (“you look old with grey hair”), aesthetic judgements, jokes (“is it snowing outside?”), bodily reactions (side-eyeing at people), tone of voice, etc. Practical consciousness involves complex reflecting monitoring of the subject’s body, other subjects and their surroundings while interacting with others, but on the fringe of consciousness.

Women in the first photo we saw were everyday women, their retired status and older age means that they are out of the work force (do not belong anymore to the work circles), perhaps without strong family ties (widows, with adult children), so colouring their hair could be interpreted as an insignia to belong to their pensioners social circle, to be part of the group where the in-group monitoring do occur.

How about women who occupy the highest positions in international politics and business, do they sport grey hair? They do have “status shield”, a term coined by Arlie Hochschild, where higher social status protects individuals from “displaced feelings of others” – anger, shame, mockery, verbal abuse, microaggressions, peer body policing etc.

Among 100 powerful women in 2016, according to and ranked by Forbes magazine, there are only 10 women who don grey hair: 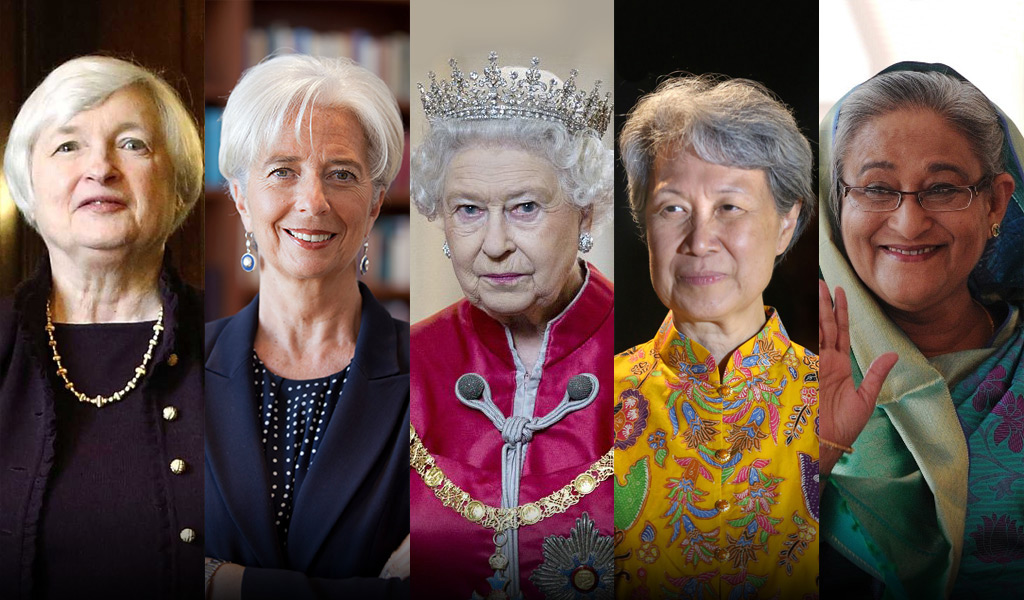 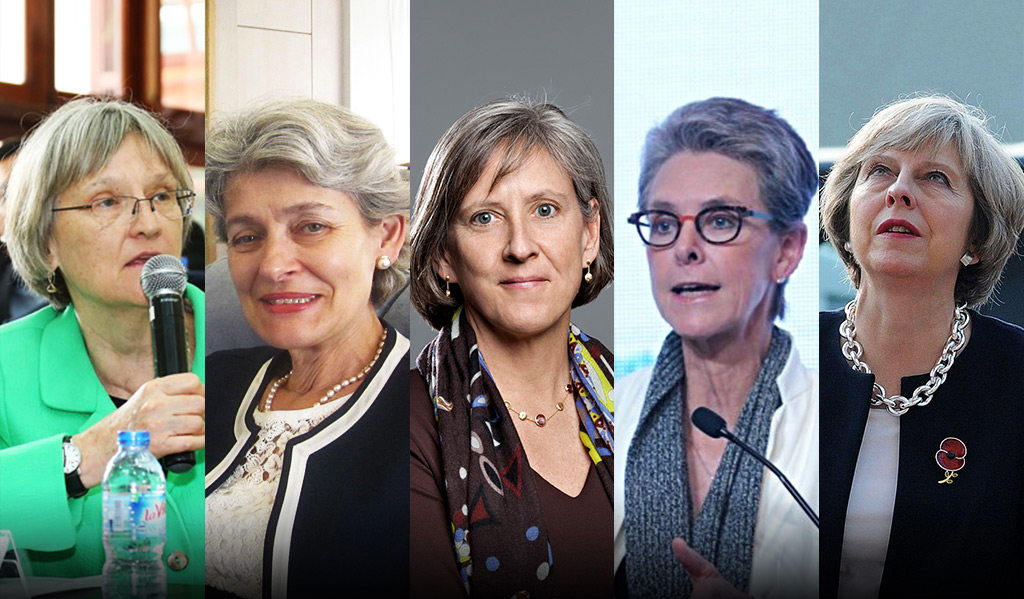 Having grey hair is obviously still not “respectable” enough for women in professional settings, because – according to Young – respectability is linked to the idea of order, where the standard remains white, bourgeois male who is rational, restrained, chaste, straight and dispassionate and by conforming to these norms sexuality, bodily functions, and emotional expressions are repressed. Cleanliness as a part of respectability agenda means avoiding anything that can be linked to bodily functions or changes, so sporting grey hair in professional environments is viewed as frumpy, sloppy or non-professional. Women are in danger to be losing respect not just due to their gender but also on behalf of their appearance because the ideal of respectability is still rooted in professional settings (government, multi corporations, high-level politics). However, despite the fact that those ten women out of the hundred do have grey hair, their hair colour can be dubbed as an “expensive grey”, i.e. colour and hairstyles one can acquire in top hair salons without looking washed out or half-styled. They are protected by their class privilege to look professional by donning (expensive) grey hair. But their lives are still pervaded with a specific type of self-disciplinary body regime, common for professional spaces.

It is called “power dressing”, a sartorial phenomenon for professional women that emerged in the late 1970s in capitalist societies when women started to occupy middle and top managerial positions in companies on behalf of second wave feminism in Central/West Europe and North America. This type of clothing practice represents the masculinisation of women’s dress – two-piece suit with skirt or pants in dark colours (black, grey, dark blue) with shorten hair or hair bun. This “uniform” was used to visually divide professional women from secretaries, a job that was most common for women in office spaces.

As we saw, most of them do perform power dressing – they de-feminize themselves, but others who do not belong to the Western culture, present themselves in more traditionally influenced outfits that could be marked as feminine rather than masculine. What is considered professional look is also culture-specific. Perhaps deliberate decolonising practices are here at stake. 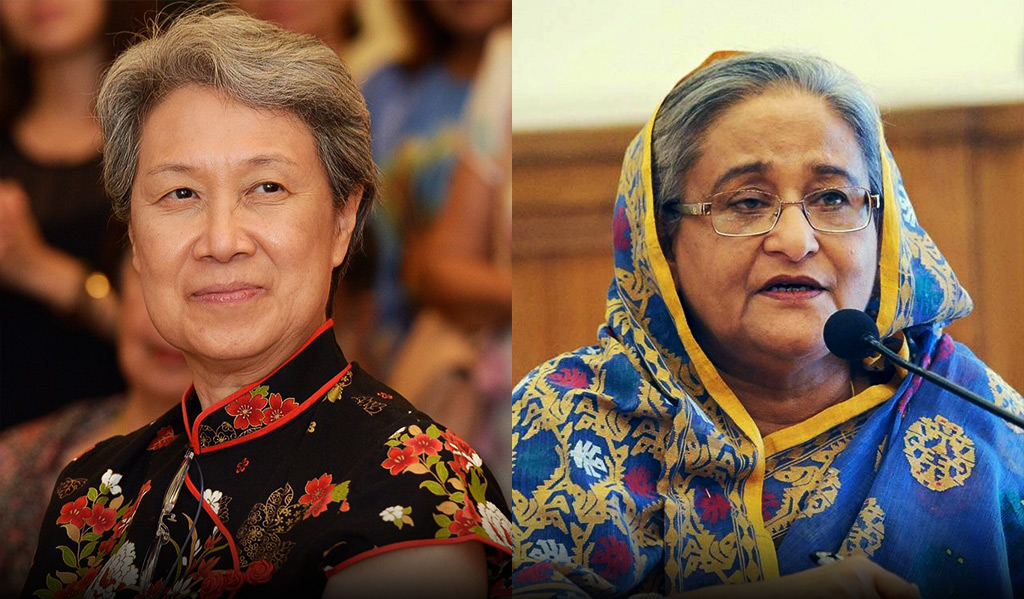 Let’s take a quick look at mass media (film in this case). Young has defined mass media as a site for unbridled fantasies, so how is it with the representation of grey-haired women. Are they even present in film? Not particularly, but when they are, they are portrayed in fantasy tales as witches (i.e. women with otherworldly power), for example, Into the Woods with Meryl Streep and Grimm’s fairy tale Hansel and Gretel – this is the image every child is exposed to and has internalized it. 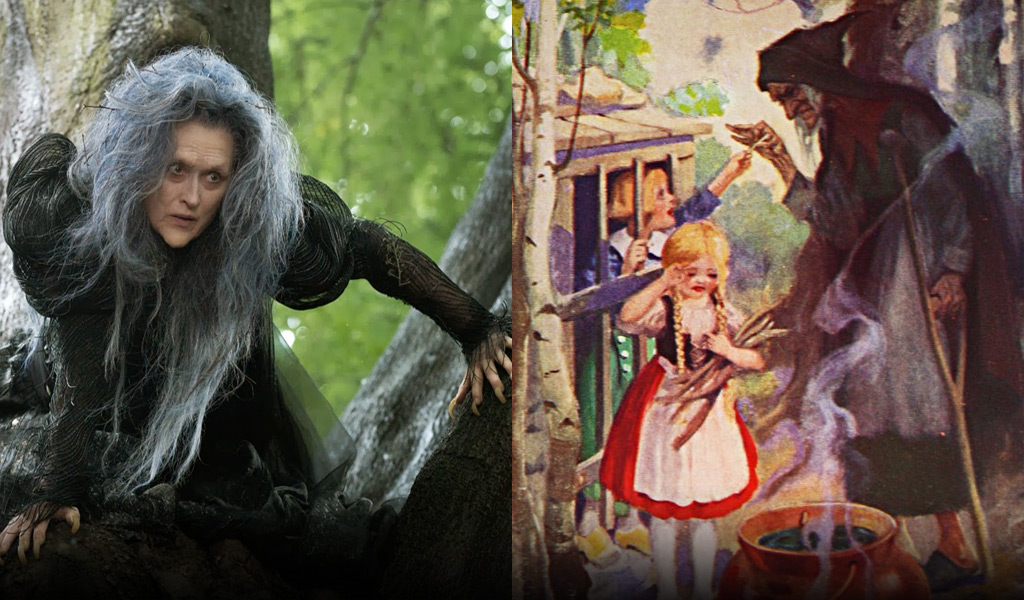 Into the Woods (2014) and Grimm’s Hansel and Gretel

When portrayed in a contemporary or futuristic cinema, they are power-hungry bitches (The Devil Wears Prada with Streep again and Julianne Moore in The Hunger Games). The representation of grey-haired women as powerful “creatures” affirms the aforementioned statement about films as spaces where the abject can come alive. Apparently, women’s power is so threatening that can only be lived on screen – as a fiction. 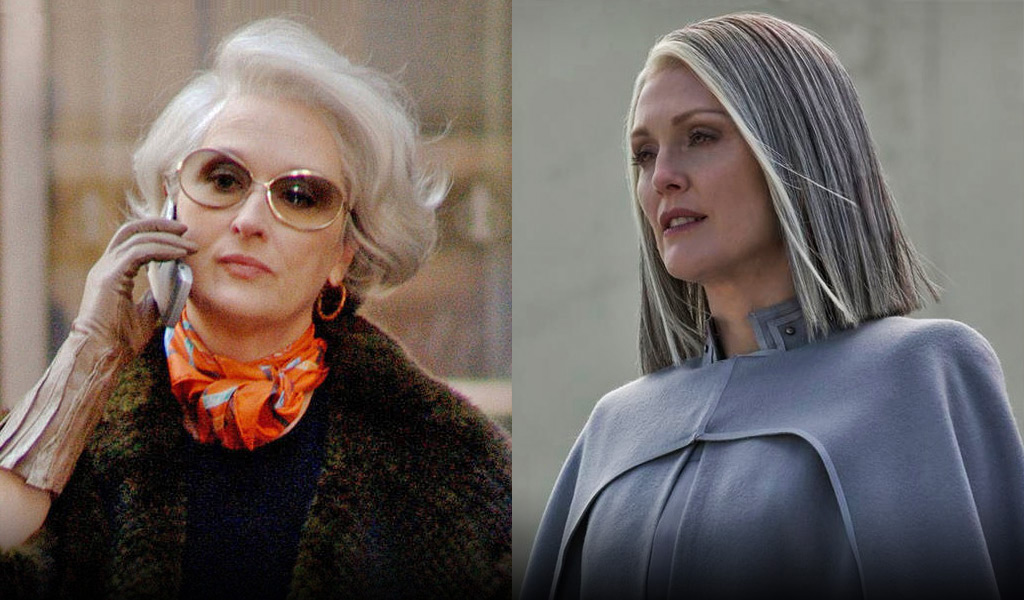 The other type of grey-haired on-screen characters are minor ones, usually mad, poor women, living on the fringes of society like Crazy Cat Lady from The Simpsons and Judy Davis in The Dressmaker. 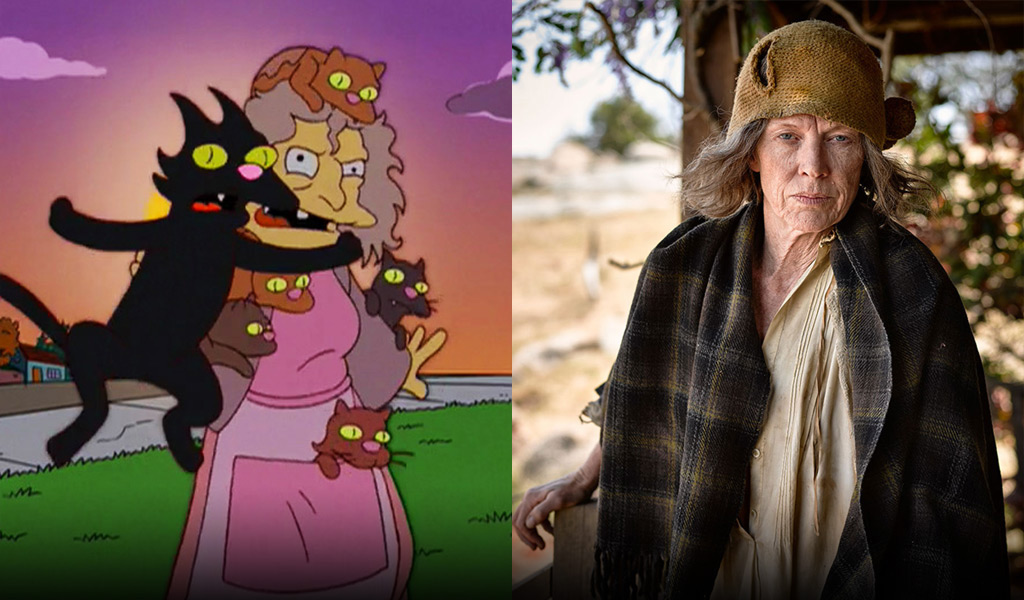 Film representations of grey-haired women are stuck on the opposite sides of power; they are either powerful or powerless with the absence of anything in-between. This apparent on-screen invisibility – except for the aforementioned extremities in power – render the cultural desire for older women to be absent in society in general.

To conclude: this avoidance of grey-hair can be explained as a gendered abjection, a fear of death and women as the bearers of flesh, life and mortality and proof lies in almost every aspect of our social Western reality: everyday life, professional environments and media representations.